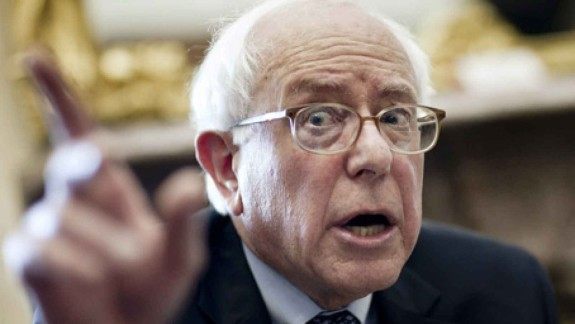 Your grandfather’s Democratic Party is dead and gone, as evidenced by its hard-Left turn away from ordinary everyday Americans who make this country work.

The latest evidence of this massive shift in political ideology is a serious legislative proposal by Sen. “Crazy Bernie” Sanders, an “independent” from Vermont who honeymooned with his wife back in the day in the “worker’s paradise” known as the Soviet Union.

Seems Bernie thinks everyone ought to have a government job, and ought to make at least $15 an hour doing it. No word yet on how Bernie would pay for this boondoggle other than “taxing the wealthy” — who, presumably, will continue working at whatever it is they do rather than taking a Bernie-supplied government gig.

(Meanwhile, the Trump FDA is about to regulate…pizza.)

About Bernie’s government jobs for all plan, he’s not quite finished with it, The Hill notes. But we are assured that the proposed legislation is on the way:

The senator is still in the early stages of crafting the plan, according to the Post, which would provide a job or required training for any American.

Sanders’s office has yet to release the details of the plan’s funding, but previous large-scale projects proposed by the Vermont progressive have involved ending tax breaks for the wealthiest Americans and large corporations.

As further reported by The Washington Post, the proposal would provide a government job to those who only “want or need” one, but no doubt Bernie the Socialist wants everyone to be on the government dole because that way the government could become quite authoritarian and demand all sorts of things from We the People, lest they take away what they giveth:

Sanders’s jobs guarantee would fund hundreds of projects throughout the United States aimed at addressing priorities such as infrastructure, care giving, the environment, education and other goals. Under the job guarantee, every American would be entitled to a job under one of these projects or receive job training to be able to do so, according to an early draft of the proposal.

Before you get all giddy and believe the lie that plans like this will “pay for themselves” as someone wrote in response to the Post article, ask yourself some basic questions and then try to answer them.

Such as, if plans like this “pay for themselves,” why are Bernie and his staff still figuring out how to pay for them, as the Post reported?

Here’s something else to ponder. If communist/socialist economic and labor policies are superior to free-market capitalism (our supposed model), why did the Soviet Union collapse? Why isn’t Cuba a global superpower? Why isn’t Venezuela rich and prosperous instead of destitute and on the brink of self-destruction?

Bernie and every other Democrat like him support using “OPM” — other people’s money — to fund their unworkable and outrageous economic and labor schemes. They believe that successful Americans ‘don’t deserve’ to keep the fruits of their labor, that the money “the rich” earn isn’t noble or honorable and doesn’t really belong to them but instead belongs to the unwashed masses who ‘need it much more’ than the rich guy does.

They don’t understand or refuse to see the logic, wisdom, and successful history of an economy driven by innovation, self-serving desires, wants, needs, and a motivation to get ahead.

Plus, there’s no need for an expensive government jobs program. As The National Sentinel reports, there is record low unemployment all over the country, thanks to the Trump economic plan of deregulation, lower taxes, and created opportunity.

Democrats are still trying to convince voters that government rather than the private sector is best suited to ‘manage’ the economy.  For anyone who still believes that one word should convince them otherwise: Obamacare.