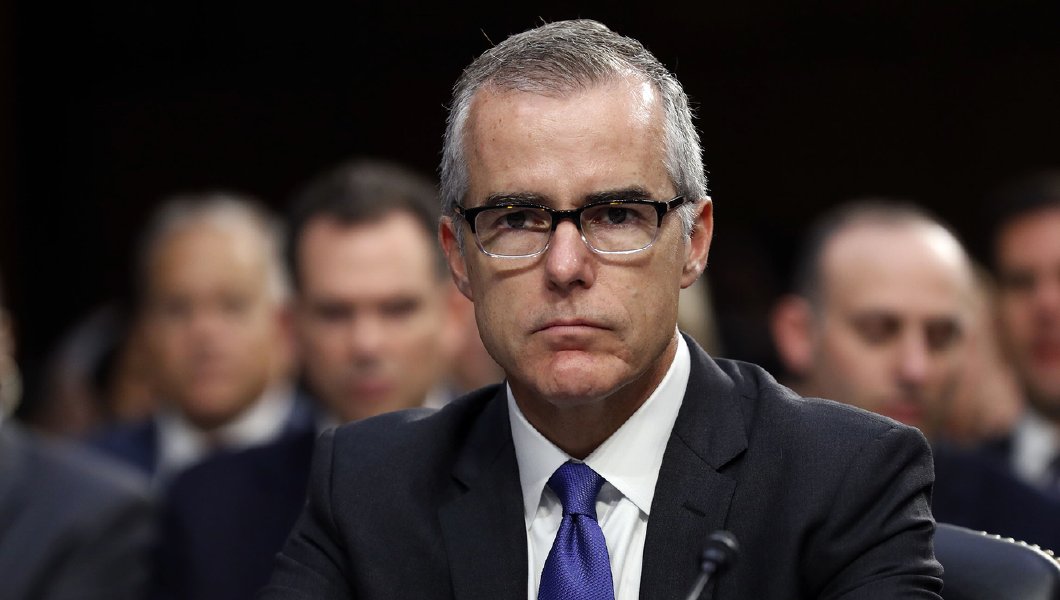 Like those of an onion, the more layers we peel to expose the D.C. swamp, the more pungent the odor.

On Monday FBI Deputy Director Andrew McCabe abruptly resigned — or was fired, we don’t know yet — from his position just a day after his boss, FBI Director Christopher Wray, went to the White House to read the House Intelligence Committee’s four-page “FISA memo” in a secure room.

McCabe’s resignation or removal came hours before the House panel voted along party lines to declassify and release the memo, which is purported to show massive Obama-era abuse of the Foreign Intelligence Surveillance Court — specifically by ranking officials in the FBI and/or Justice Department who may have used the unsubstantiated, unverified “Trump dossier” as ‘intelligence’ rather than as an opposition research document in order to get a surveillance warrant so they could spy on then-GOP nominee Donald J. Trump’s campaign.

Currently, the release of the memo is in Trump’s hands; he has five days from Monday to decide whether he wants all or part of it — or none of it — released to the public. For the record, not a single Democrat on the committee voted in favor of transparency and the rule of law.

That’s probably because McCabe — whose wife ran for a Virginia legislative seat as a Democrat and received a donation from a Democrat-aligned political action committee tied to then-Gov. Terry McAuliffe, a long-time Hillary Clinton ally — is mentioned in the memo, according to Fox News host Tucker Carlson.

And it’s also probably because McCabe has been the subject of an investigation by the Justice Department’s inspector general’s office over allegations the FBI was politicized a) to cover for and exonerate Clinton over her mishandling of classified emails; and b) to undermine Trump’s candidacy and his presidency.

As reported by the Washington Post, it’s possible McCabe also sabotaged his own department’s Hillary probe:

The Justice Department’s inspector general has been focused for months on why Andrew McCabe, as the No. 2 official at the FBI, appeared not to act for about three weeks on a request to examine a batch of Hillary Clinton-related emails found in the latter stages of the 2016 election campaign, according to people familiar with the matter.

The inspector general, Michael E. Horowitz, has been asking witnesses why FBI leadership seemed unwilling to move forward on the examination of emails found on the laptop of former congressman Anthony Weiner (D-N.Y.) until late October — about three weeks after first being alerted to the issue, according to these people, who spoke on the condition of anonymity to discuss the sensitive matter.

Weiner is the estranged husband of long-time Clinton aide Huma Abedin; by slow-walking the probe, McCabe could serve as the gatekeeper against information that could prove damaging to Hillary’s election chances, as the Post notes: “A key question of the internal investigation is whether McCabe or anyone else at the FBI wanted to avoid taking action on the laptop findings until after the Nov. 8 election, these people said. It is unclear whether the inspector general has reached any conclusions on that point.” (Related: FINALLY: DoJ RE-opens probe into Hillary EMAIL scandal after MORE classified data found on Huma laptop.)

It should also be noted that one of the points of interest in talks held between Wray and McCabe shortly before the latter left his post was the inspector general’s investigation, the Post noted further. It’s not yet been reported what was specifically discussed, but given the Post’s current reporting and McCabe’s likely inclusion in the FISA memo, we can get a pretty good idea.

The IG was supposed to appear before Congress on Tuesday to discuss the Clinton email case; he canceled.

Also in play: What did former FBI Director James Comey know, and when did he know it? Remember, he was the one who reopened, then promptly closed, the last-minute review of emails found on Weiner’s laptop.

The D.C. swamp is wide, deep, and smelly.