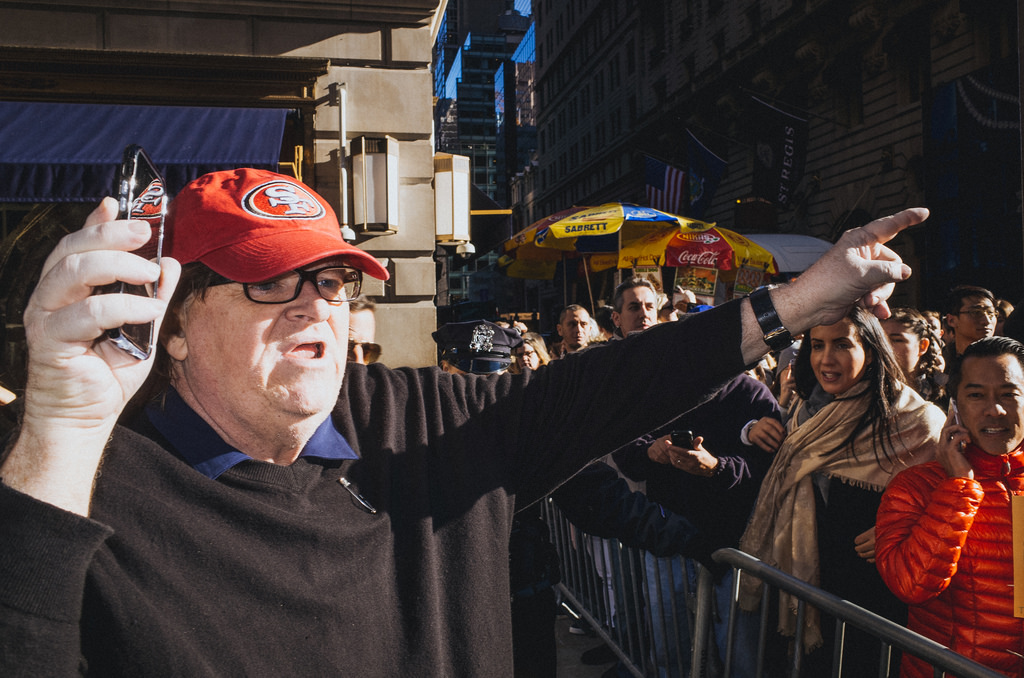 As Left-wing Democrats and their sycophantic supporters in the media and entertainment world daily accuse President Donald J. Trump and Republicans of being “Nazis” and “anarchists,” it’s become more and more obvious by their behavior that they are the biggest threat to the country’s stability.

Case in point: Doubling down on the divisive, racist nature of the Democratic Party he loves and supports, Alt-Left filmmaker Michael Moore has just called for the ethnic cleansing of all white people in America and, since he’s Caucasian too, we assume he’s including himself (unless he’s “identifying” as another ethnicity, like Sen. Elizabeth “Fauxcohontas” Warren does).

At another #NeverTrump hatefest on Monday, celebrities gathered in New York City to assuage their intemperate, intolerant consciences by denouncing and disparaging our duly-elected president (and they wonder why more and more Americans are staying away from movie theaters).

At an event called, “The People’s State of the Union” — a counter to Trump’s real State of the Union Address the following evening — one after another, the celebs roasted the president and, with every derisive word, the tens of millions of Americans who put him in office.

Particularly galling was Moore’s “performance” — galling and, as always for Democrats, divisive.

Moore, who released an anti-Trump documentary during the 2016 campaign and later mounted an anti-Trump Broadway play, worked himself into a frenzy as he issued a “to-do list” for 2018, beginning with what he called the “widespread massive removal of Republicans from the House and Senate the likes of which this country has never seen.”

[Memo to Moore: Good luck with that.]

He also (of course) called for Trump to be removed from office…because, you know, when someone not named Hillary Clinton wins, they must be impeached! Never mind that it is Clinton who is the most criminally investigated, criminally corrupt presidential candidate ever to be nominated by a major party. (Related: Next up: JUSTICE for CLINTONS over alleged foundation abuses?)

“The need to remove him — and also any Democrat who is in the way of removing him — that is, at this point, a moral imperative for each and every one of us,” he added. “Removing him, and Pence, and the whole disgusting lot of them… still won’t be enough. We must remove and replace the system and the culture that gave us Trump in the first place.”

“As we seek to rid ourselves of Trump, we must also cleanse our American soul of our white male privilege,” Moore continued.

Oh, brother. So that means if we could roll back time and culturally implement what he is saying we must do, he’d still be an insignificant pauper from a crummy Michigan city that nobody ever heard of or would ever hear about, instead of an obnoxious, loud mouth, pasta-eating, garbage-gut, revolutionary wannabe who was lucky enough to have made some good money making movies.

But let’s step back a minute from Moore’s ethnic self-hate; what he and the rest of the lunatics who gathered with him have been suggesting not-so-casually is their preference for removing a president that the American people elected — and in any way possible, legal or otherwise.

They don’t care what kind of turmoil that would create. In fact, if I didn’t know better given the kind of anarchic groups they back, I’d say that the Alt-Left in America would love to not only see Trump forcibly removed from office, but all Republicans as well. They’d love to see all of us lined up against a wall and shot or, perhaps in true Nazi-like fashion (because they are the real fascists) marched into a gas chamber.

Don’t think for a moment if they had a chance to do just that they wouldn’t take it. They would. And then they’d justify it as morally acceptable (and even necessary ‘to save the country!’) in their warped, sick minds.

Americans are more divided now than ever, and it’s because Democrats work overtime making sure we stay that way. This won’t end well. (Follow more news on the cult-like demands of the unhinged Left at LeftCult.com.)