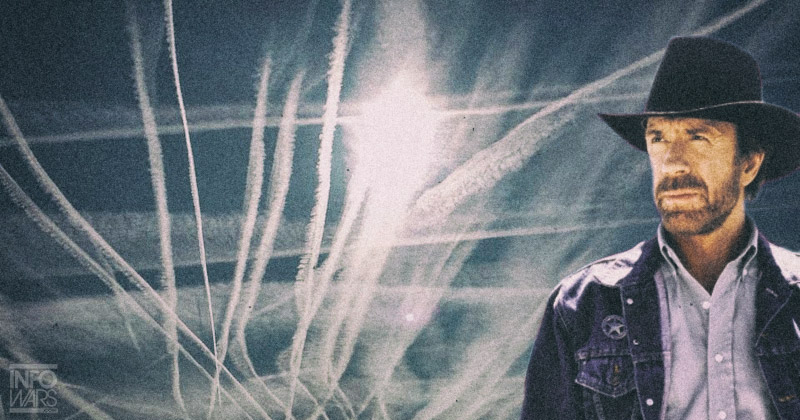 Do you get a visceral reaction when jets spew their poison and ruin a beautiful blue sky day with their aerosols, nanoparticles and assorted toxic chemicals? 76-year-old actor and activist Chuck Norris agrees with you. Norris is using his celebrity and writing prowess to bring attention to these toxic geo-engineering programs. He recently penned an article in World News Daily entitled “Sky Criminals,” as reported by Inquisitor.com:

“[Norris] argued that people are not taking the issue seriously when there is evidence pointing to the government as having already used chemtrails.

“The chemtrails conspiracy theory claims that the U.S. government or other powerful people are using airplanes, helicopters, and other types of aircraft to control weather and people. In his article entitled Sky Criminals, Norris urged his readers to join him in asking more questions about ‘covert chemtrailing’ – which means that not only is the government practicing it, but also does it in secret.”

When a populous has been trained to bow to the beast god of technology, they forget to look up. So, tell the uninformed to raise their heads and watch these jets spewing thick puffs of “exhaust” that do not dissipate like contrails, but spread out like tentacles, forming a haze that cuts down the sun’s rays. Norris writes about these artificial systems in his article from World Net Daily:

“CDR technologies include ‘bio-energy with carbon capture and storage, biochar, direct air capture, ocean fertilization and enhanced weathering,’ according to Wikipedia. SRM technologies ‘seek to reflect sunlight and thus reduce global warming. Proposed examples include the creation of stratospheric sulfate aerosols. Stratospheric sulfate aerosols create a global dimming effect [that] has made them a possible candidate for use in solar radiation management climate engineering projects to limit the effect and impact of climate change due to rising levels of  greenhouse gases. Delivery of precursor sulfide gases such as sulfuric acid, hydrogen sulfide (h2S) or sulfur dioxide (So2) by artillery, aircraft and balloons has been proposed’

“Chemtrailing is the ‘public’s term for the classified [covert] and ongoing artificial modification of Earth’s climate systems using reflective nano-materials (aerosols) to reflect sunlight. The aerosols are dispersed via jet aircraft trails that expand into reflective artificial clouds.'”

Without photosynthesis, life on earth would cease to exist… Chemtrails have dimmed the earth by 31% since 1993

“The actual 2003 abstract from the National Center for Biotechnology Information (NCBI), a part of the U.S. federal government’s National Library of Medicine – a branch of the National Institutes of Health, reads:

“The feasibility of using aerosol vaccines to achieve mass and rapid immunization, especially in developing countries and disaster areas, is being assessed on the basis of current available information. The aerosol mode of vaccine introduction, which best follows the natural route of many infections, may first lead to development of immunity at the portal of entry, and may also induce a more generalized defense.”

Informed citizens know that carbon is essential to life and that the entire global warming/climate change excuse to control carbon is a ploy to control all life on earth. Other informed sources discuss chemtrials as a mechanism to drop nano bio applications for mind control. Whether barium, aluminum, sulfates, vaccines or bio apps, it’s time to look up and stop this evil destroying our skies and our food supply.