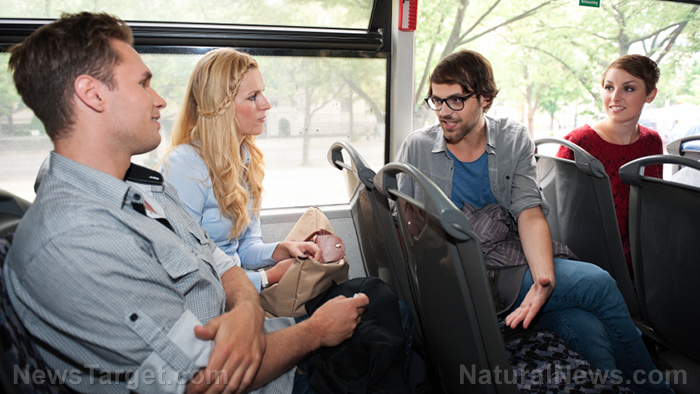 Watch what you say, everyone: A new study suggests that aside from coughing or sneezing, talking can also transmit infectious pathogens like the Wuhan coronavirus (COVID-19) to one another. The research, published in The Proceedings of the National Academy of Sciences, revealed how talking can launch thousands of droplets that can remain airborne for up to 14 minutes.

It’s long been recognized that respiratory viruses hitch a ride inside tiny droplets, which are generated by coughing or sneezing. After the droplets are launched, these can either fall a few feet to the ground or land on surfaces like door handles, tables and even smartphones, and spread to anyone who then touches the surfaces. But in some cases, the droplets can remain airborne, where they are inhaled by others.

A person who coughs or sneezes can fling hundreds of millions of viral particles into the air, especially if he is sick. Based on experiments, a single cough can release around 3,000 respiratory droplets, while sneezing can launch as many as 40,000 droplets.

In their research, scientists from the National Institutes of Health and the University of Pennsylvania looked at whether speaking can cause airborne virus transmission, given that speaking produces oral droplets. The team first asked volunteers to repeat the words “stay healthy” for 25 seconds into the open end of a cardboard box. While the participants were speaking, the researchers shone green laser light sheets inside the box to track the droplets produced by the speaker. (Related: Coronavirus found in stool of former patients more than a month after they test negative.)

They found that talking normally generates around 2,600 small droplets per second. Comparing this finding with previous studies, the team posited that speaking louder could create larger droplets and more quantities of them. While the study didn’t record droplets produced by people with COVID-19, they estimated that a person who speaks loudly could launch at least 1,000 virus-containing droplets in a single minute.

The team also found that while droplets start to shrink after leaving a person’s mouth, these can still remain airborne for anywhere between eight to 14 minutes.

“These observations confirm that there is a substantial probability that normal speaking causes airborne virus transmission in confined environments,” they wrote in their report.

While the team pointed out that the experiment was done in a controlled environment, they noted that their reported values are conservative estimates, especially since some people have a higher viral load and can produce even more particles than average. Despite these conditions, their findings could not only help explain how the coronavirus can jump from person to person in close quarters like offices, nursing homes, cruise ships and other confined spaces, but also strengthen the case for wearing face masks and taking necessary steps to head off the contagion.

Phonetics play a role in the spread of coronavirus

In their study, the NIH and UPenn researchers used the phrase “stay healthy” since the “th” consonant, or the /?/ sound in “with,” was found to be effective in producing more speech droplets. Another study from a team at the University of California, Davis found that the vowel sound “e” in “me” can also produce more droplets than other vowel sounds.

Scientists don’t know yet whether talking is just as contagious as coughing or sneezing, but for Linsey Marr, an engineering professor at Virginia Tech who wasn’t involved with either study, these findings add to a growing body of evidence highlighting the need for social distancing to slow the spread of the virus.

“Based on this and other evidence, it would be wise to avoid extended face-to-face conversations with other people unless you are far apart and in a well-ventilated space, including outdoors,” she added.

Visit Pandemic.news for all the latest news on the coronavirus pandemic.