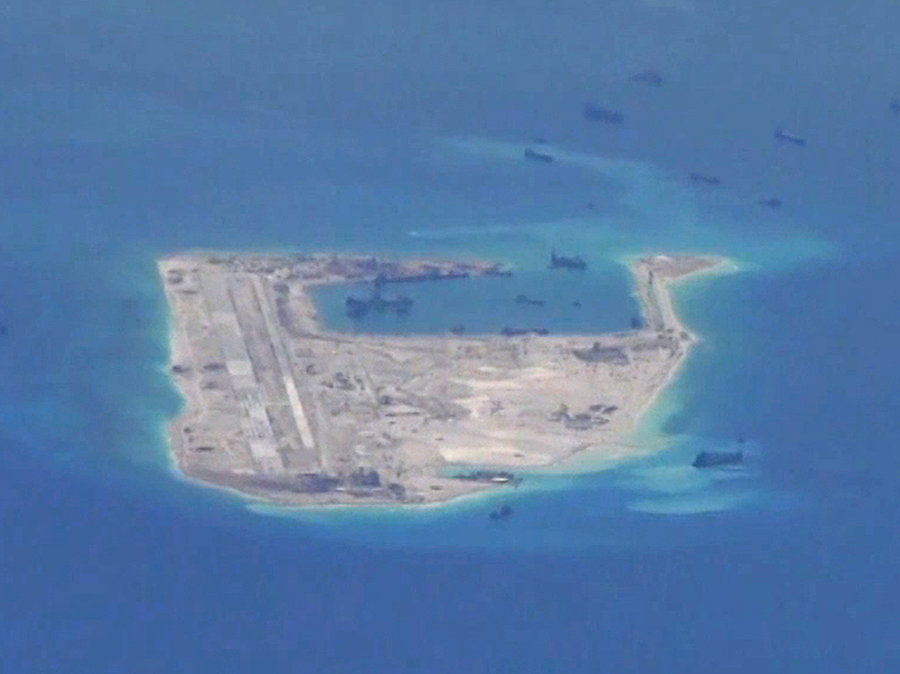 The Chinese government may not be able to walk and chew gun at the same time, but the United States president certainly can and Beijing is about to discover that.

According to The Asia Times, China is attempting to ‘take advantage’ of the current Wuhan coronavirus (COVID-19) pandemic to flex its muscle in the highly contested and well-traveled waters of the South China Sea.

In recent days, China has conducted military drills and deployed large-scale military assets to the maritime area while at the same time officially celebrating strides made in exploiting disputed energy resources in the fossil fuel-rich sea.

For years, China has been developing several atolls in the region and building manmade islands near the Spratly Islands to make an out-sized and completely illegal claim to the entire South China Sea, one of the world’s busiest and most lucrative trade routes.

In addition to construction buildings, the Chinese military has added barracks, airstrips, radar installations, and even surface-to-air and anti-ship missiles. In other words, China is not simply intent on having a ‘presence’ throughout the region, but Beijing intends to control it.

And now, as the U.S. — China’s main competitor — appears to be bogged down responding to a pandemic of Beijing’s creation, the Communist regime believes it sees and opportunity to further solidify its control.

Some observers, according to The Asia Times, see China’s actions as a tactic of whipping up nationalist sentiment at a time when its own citizens are still suffering illness and death from coronavirus.

But some geopolitical experts believe instead that the Chinese are trying to exploit what they perceive as a weakened America to their advantage.

Virus or not, the U.S. remains ready

On the surface, that thinking appears to be rational. After all, one of the largest warships on the planet — the nuclear-powered aircraft carrier USS Theodore Roosevelt — is essentially out of service because its crew is being offloaded in shifts after docking in Guam because there is a coronavirus outbreak aboard.

And yes, elements of the U.S. military and National Guard are being called up and mobilized to help treat coronavirus victims and build field hospitals.

Finally, U.S. Army Gen. Mark Milley, chairman of the Joint Chiefs of Staff, announced Thursday that additional active duty elements of the Navy and Army are being sent to assist federal counternarcotics agents in a new ‘war’ against the Mexican drug cartels — which are also trying to exploit the coronavirus to smuggle deadly drugs into the U.S. (Related: Retail stores in large cities appear to be preparing for MASS RIOTS by boarding up their windows.)

But none of that means the U.S. is too distracted to react to a threat, which China clearly is.

Still, Beijing is doing its best to not only ‘colonize’ the South China Sea, but also, by its military presence in the region, drive a wedge between the United States and her traditional European and Asian allies, to make it appear as though Washington has neither the strength nor the will to oppose Beijing.

Some of China’s efforts in the South China Sea are purely matters of self-economic interest. For instance, according to the Ministry of Natural Resources, the country recently conducted its most successful natural gas extraction in terms of volume and production in a single day, and in a contested region of the northern South China Sea.

Also, the Chinese military has been conducting drills in the region led by the country’s first aircraft carrier, the Liaoning — which is no match for American flattops.

In any event, China will continue pushing in the region until someone pushes back. And eventually, we will — virus or no virus.