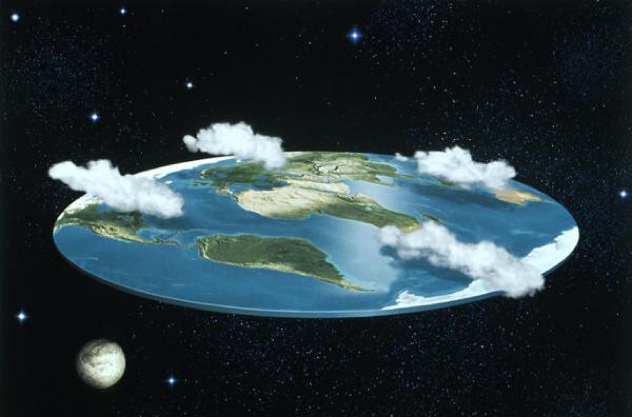 Thanks to a coordinated right-wing media disinformation campaign that has spread bad ideas faster than the Wuhan coronavirus itself, we have now arrived at a point in America where many prominent pro-Trump publishers, pundits and thought leaders have devolved into something resembling a suicide cult of mathematically illiterate “Flat Earth” deniers of biological reality. It’s truly horrifying to watch.

All over conservative media the last day or two, we hear prominent voices calling the coronavirus a “hoax” (Ron Paul), a “sham” (Joe Hoft, The Gateway Pundit), a “no worse than the flu” scenario (Rush Limbaugh), a “false flag” operation or a “fake science” event that’s rooted only in mass hysteria and nothing else. Joe Hoft, a guest on InfoWars earlier today, claims that the coronavirus has a lower fatality rate than the regular flu, and he says the whole thing is a “sham.” (I’ve dismantled his bad math in this article.)

Showcasing their science illiteracy, conservative commentators like Rush Limbaugh claim the entire coronavirus “hysteria” is nothing but left-wing media hype engineered to harm Trump. Rush Limbaugh is the same radio host who claims that Leftists are morons for thinking that biology isn’t real, thanks to their transgenderism beliefs. But when Rush doesn’t want a virus to be real, he wishes it away in precisely the same twisted fashion. Biology is only real when it serves his political purposes, it seems. In other words, it’s selective biological realism, not universal biological realism.

Meanwhile, celebrity doctor Dr. Drew continues to claim the coronavirus pandemic is no worse than the flu. Yes, seriously, people are still saying that, but only in America. Nowhere else in the world are large portions of the population dumbed down enough to think the coronavirus is some sort of elaborate global hoax.

By the way, even the New York Times can do basic math, and this graphic from their site shows that if just 30% of the American people get infected with the coronavirus, a 2% case fatality rate results in two million deaths: 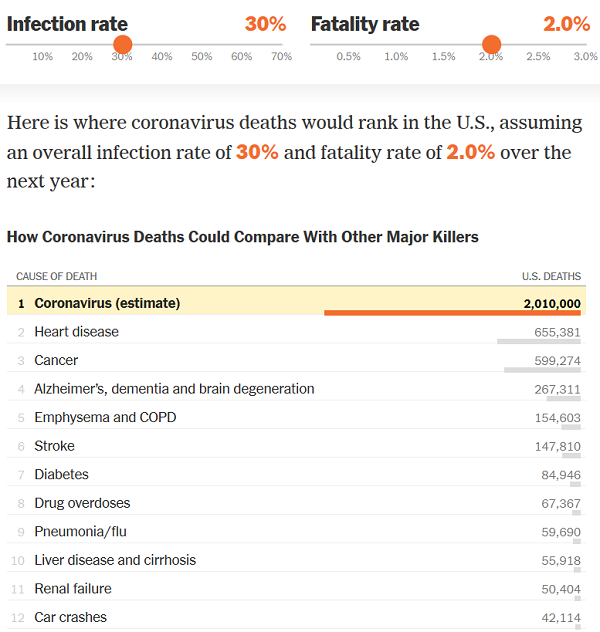 But apparently that’s all “fake,” according to many conservative publishers. After all, it’s the New York Times, they say, so it must be fake even if it’s just straight up multiplication of numbers. I suppose if the NYT printed 2+2=4, conservative publishers would turn around and insist that 2+2=7 just to disagree.

While various Fox News hosts tell their audience the coronavirus is nothing to worry about, a wave of independent media writers and commentators currently claim coronavirus testing doesn’t work and that all the “positive” tests are false positives. ALL the testing is fake, they say, and then they claim the “real” death rate is only 0.1%, a number they derive from nowhere.

Dealing with these people is like trying to debate the acceleration of gravity with Flat Earthers, with whom you can’t even agree on the basic construct of physics in order to have an informed discussion in the first place. To even talk about infectious disease with someone, you first have to agree that viruses exist, yet even that is now bizarrely denied by a surprisingly large number of conservatives, including people I know personally that I’ve had to now block from spamming my mobile phone with a bizarre, maddening stream of lunatic rantings that claim I’m “misleading people” for accepting the “false theory” that viruses exist. (Seriously, I’m about to build a time machine so I can zap these people back to the 1830s, where they belong…)

I haven’t even told them yet that we just put in an order for some Thermo-Fisher gene sequencing PCR hardware for my lab. Imagine how furious they’re going to be when they find out I’m using genetic sequencing to conduct food safety testing. I can already see the incoming complaints: “How dare you scan food samples for the genetic fingerprint of dangerous microorganisms!” Apparently, I am not only blackballed from mainstream science for conducting ICP-MS heavy metals tests on vaccines, but now I’m blackballed from alternative science for believing in the existence of viruses.

In other words, anyone who engages in actual science will be banned everywhere, since no legitimate science is allowed anywhere.

(Seriously, folks, I almost wrote another article with the title: “Note to all conservatives, if you are scientifically illiterate and can’t do math, shut the f##k up about the coronavirus” but then thought that might sound too harsh, so I canned the idea.)

No wait, it’s a grand global coordinated conspiracy involving 100 countries to fake thousands of deaths and crash their own economies just to fool us for some reason

And then come the “global false flag” theories, which are so far beyond bizarre that they make me cringe, and I seriously believe Building 7 was brought down by explosive charges. Right now, a significant portion of the pro-Trump, conservative movement quite literally believes that 100+ nations are conspiring to stage thousands of fake deaths along with a fake economic collapse designed to fool everybody… for some reason.

Remember that book called “Nobody Died at Sandy Hook?” Amazon banned it. It spurred lawsuits and major negative press against Alex Jones (who wasn’t the author, by the way, even though the fake news media claimed he was). Well soon, I’d imagine, we’re going to have conservative publishers churning out a whole new volume called, “Nobody died from the coronavirus,” and it will have chapters with titles like, “There’s no such thing as a virus” and “How China faked its own economic collapse to fool Trump.” Don’t forget the concluding chapter, called, “Linear thinking in an exponential world.”

The last time I witnessed something this perplexing was when several people approached me at a restaurant and tried to convince me to promote their flat Earth theories. They had an entire mental model for why the Earth was flat, and why gravity doesn’t exist, and why the sun and moon are flat discs in the sky, and other entertaining mental models that would blow your mind. (For example, they believe tides are caused by the sun and moon emitting electromagnetic force fields that shove the water around, since gravity isn’t a universal force that exists in their model of the universe.)

But now, it’s conservative publishers who have gone “full flat Earth” on the coronavirus!

None of this is real, they say, so you can ignore the following map of coronavirus infections in America. Merely wishing for it to go away solves the whole problem!

We are literally watching prominent members of the pro-Trump, conservative movement self-destruct right in front of our very eyes. If Trump loses in November, it will surely be because unknown thousands of potential Trump voters were killed off by the coronavirus after becoming complacent from reading all the wildly misleading disinformation coming out of conservative publishers right now.

According to the Washington Times, Wapo’s Jennifer Rubin just said that a lot more Republicans will die from the coronavirus than Democrats, since they believe Fox News which has basically gone into “flat Earth” mode on all this, too. Via the Washington Times:

“There is a particular cruelty, irony that it is their core viewers, the Republican older viewers, who are the most at risk,” Ms. Rubin, a self-described conservative and former Republican, said during a panel discussion Sunday morning on MSNBC’s “AM Joy.”

As much as it’s a horrible thought to agree with anything coming out of the fake news Washington Post, Jennifer Rubin isn’t wrong. What we are witnessing right now is a suicide cult implosion of the Republican masses across America, many of whom devoutly refuse to take precautions against the coronavirus and will therefore become infected, hospitalized and buried.

Fortunately, Trump himself is far better informed about all this than many of his own followers, which is why Trump is pleading with America to practice strong social isolation habits so that the spread of the virus is slowed. If Trump is to survive the stunning ignorance of many of his own followers, he’s going to have to convince them to self-isolate so they don’t all kill each other in the largest suicide cult extravaganza we’ve seen since the Jonestown massacre of 1978.

So what do we do now?

And read Pandemic.news if you want to live.