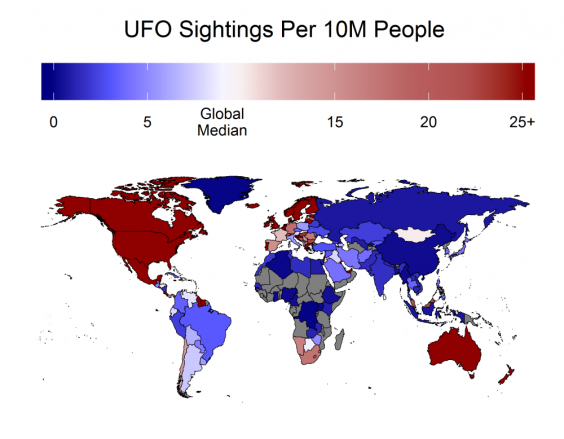 The US military had several UFO encounters in 2004. A clip was leaked in 2007, but the Department of Defense didn’t confirm its authenticity until 2017. As military pilots come forward with their UFO sightings, the Department of Defense now claims they have top secret footage of the UFO encounters. Why has the military kept this video evidence classified for the past sixteen years?

A Freedom of Information Act (FOIA) request, filed by researcher Christian Lambright, has prompted the U.S. military to admit they possess classified video of a UFO encounter off the coast of Mexico. In 2004, the USS Nimitz encountered several flying “Tic Tac” shaped UFOs in the Pacific Ocean. The Defense Department confirmed that the unidentified objects were captured from Forward Looking Infrared gun pod video that was shot by an F-18 Super Hornet pilot.

According to the FOIA request, the Office of Naval Intelligence claims they have more top secret slides depicting the encounters. Several interviews have been conducted with first-hand witnesses. Many of the witnesses marvel at the stealth, speed, and other-worldly movement capabilities of the unidentified objects.

Chad Underwood, the Navy pilot who captured the original footage, spoke about the encounter in the New York Magazine. He called the unidentified object a “Tic Tac” shaped UFO. The object caught on video was a wingless, oblong flying object of unknown origin.

Why is the military so secretive about the encounters?

At first, the Office of Naval Intelligence responded to the FOIA request with resistance. The public affairs coordinator, Camille V’Estres, claimed the department possessed “no releasable records.” The letter signified that the department did possess TOP SECRET briefing slides of the encounter, but claimed the classified information was created by another agency. The agency could not disclose the video due to national security concerns. Finally, the letter unveiled the existence of a classified video that could not be released until the Naval Air Systems Command made a final determination.

Before the FOIA request, a 76-second video clip was leaked in 2007; the Pentagon confirmed that the clip was authentic ten years later. This clip is just a piece of the entire puzzle and might not be the only video footage of the encounters. Researchers believe at least six Super Hornet pilots made visual contact with the objects on November 14, 2004.

After conducting interviews, researchers found that the military was interested in these UFOs. The military tried to track them down for two weeks using advanced AN/SPY-1B passive radar.

Pilot Commander David Fravor claims to have made visual contact with the UFO while flying in an F/A-18F Super Hornet. He claims the object dove below the water momentarily, before resurfacing and speeding out of sight. Fravor promptly radioed Navy Pilot Chad Underwood and told him to keep an eye out for the bizarre craft.

Underwood recalls, “So, we go out to where our designated training area is. We’re not necessarily looking for something, but the Princeton had a specific object that they wanted us to hunt, for lack of a better word. And all of a sudden, I got this blip on my radar.”

Underwood got a visual using the jet’s infrared gun pod camera. He estimates the object was twenty miles away. The object did not follow the normal laws of physics. It’s engines did not even emit a heat plume.

“The thing that stood out to me the most was how erratic it was behaving. And what I mean by ‘erratic’ is that its changes in altitude, air speed, and aspect were just unlike things that I’ve ever encountered before flying against other air targets,” Underwood told the magazine.

For now, this classified video is being kept secret by the U.S. government. For more on UFO sightings, visit UFOs.News.