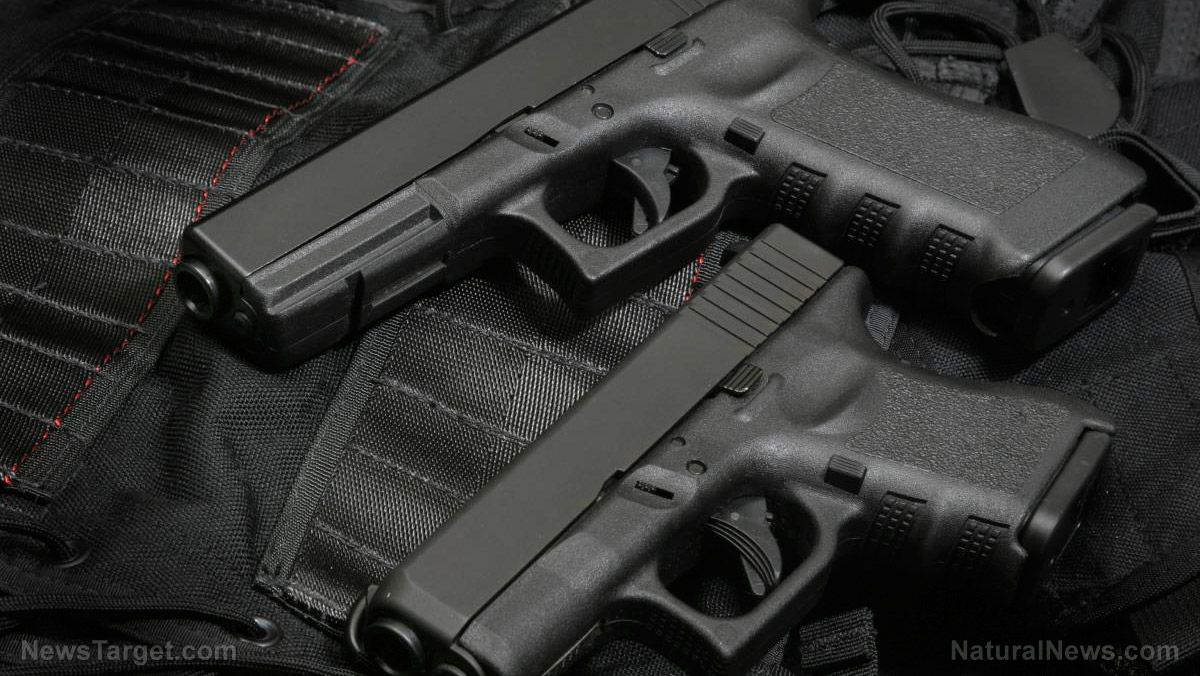 “Today many condemn the idea of nationalism by connecting it to race hatred (e.g., white nationalism),” classicist and commentator Victor Davis Hanson observed in the November 2019 issue of Hillsdale College’s always-enlightening Imprimis. “But historically, the modern nation-state has proven uniquely suitable to preserving individual rights. The American nation in particular was successful in uniting individuals of different races, ethnic backgrounds, and creeds into one people based on shared principles, a unique physical space, and a common national story. Our nation is the best example in human history of positive nationalism.”

You wouldn’t know it listening to the coalition of politicians, pundits, “journalists,” academics and assorted professional disarmament zealots attacking Old Dominion gun owners before and after Monday’s hysterically anticipated “Lobby Day.” If theirs were the only words you heard, and for most people they were, you’d go away believing the “racists” and “extremists” who emerged from their “Second Amendment Sanctuaries” to terrorize “progressive” Richmond had transformed the famous bumper sticker slogan into “Virginia is for Haters.”

Case in point were the words of the man waging what one demonstrator’s sign pegged “The War of Northam Aggression,” Governor Blackface himself. He initiated the hysteria by ordering a caged-in citizen disarmament zone around the Capitol, and by smearing gun owners who had peaceably lobbied while armed, without incident, for years:

“Three years ago, Virginia and the nation, watched horrified as civil protest was marred by violence and hate.”

“R” is the new scarlet letter, you see. It’s like being tagged as a child molester (at least until the “progressives” finally “normalize ” that, and ruin the life of any “hater” opposing it). Get accused and your life will be ruined. Good luck holding on to your job or to customers or getting new ones. And don’t expect the world to go easy on your kids.

Ideological “cleansing”: What a way to punish and ostracize those whose political viewpoints stand in your way.

And forget the fact that it’s not us who posed for a blackface/Klan picture. “Progressives: have a way of overlooking when the sins are theirs, and a complicit media redirects attention so the public will “pay no attention to the man behind the [sheet].”

Despite things not working out the way the governor ginned up all that fear for, reality hardly stopped his political allies from doing what they do best, springboarding off his lie and adding whoppers of their own.

Taking their cue on what to amplify, NBC was representative of the rest of the DSM (Duranty/Streicher Media), breathlessly planting seeds like:

“On far-right corners of the internet, some have said the rally will accelerate a ‘race war.’”

What “far-right corners”? As if on cue, “authorities” had miraculously picked some low-hanging fruit they’d infiltrated and surveilled for God knows how long, an illegal alien from Canada and two “neo-Nazis.” Any guesses which one is the CI? Hey, who better to conflate with Bill of Rights advocates?

Never mind that “Nazi” is short for “National Socialist” and protests (lies) from the left notwithstanding, UK Liberal Party supporter George Watson definitively debunked those in his landmark “Hitler and the Socialist Dream,” documenting:

“It is now clear beyond all reasonable doubt that Hitler and his associates believed they were socialists, and that others, including democratic socialists, thought so too.”

Trying to keep up with its relative network, where one reporter called Lobby Day a “white supremacist rally,” MSNBC told its viewers “white nationalists [are] swarming the … Capitol.”
Never ones to whom little things like the truth matter, the rice bowl gun-grabber groups weren’t about to miss an opportunity to join in and bear false witness:

“VA is in a state of emergency because white supremacists and nazi’s are using their 2nd amendment rights to shutdown the 1st amendment rights of students, veterans, and clergy,” the ever-freaky David Hogg chimed in.

Never mind that Black Guns Matter provided much rally leadership, that gun owners of all races gathered together in a spirit of determined fellowship, and that all conducted themselves with outstanding good behavior. The one arrest was of a young woman wearing a bandanna, and the complaint by her companion gives a pretty strong indication of whose side they landed on:

“‘Way to keep our city safe guys while there’s f****n’ Nazis and terrorists around here,’ the man says.”

The portrayal of gun owners as Nazis and racists because the majority are white is part of a larger racist political power seizure, and much of that is being fueled by academia, where “conservative” speakers are banned because of the “hate speech is not free speech” tyranny.

And let’s not forget the “professionals.”

“A psychoanalyst from the New York Psychoanalytic Institute is on a speaking tour where he discusses how ‘whiteness’ is a ‘malignant, parasitic-like condition’ to which those of pallid skin tone ‘have a particular susceptibility,’” The College Fix reports. This is not just some random outlier—Dr. Donald Moss is viewed as an “expert” all over the world, and is “the program chair at the American Psychoanalytic Association.”

As an aside, such as these are consulted to determine if you should be subject to “red flag” confiscations, and based on his lunatic “theory,” your skin color makes you eligible. His “solution” …?

“Effective treatment requires a combination of psychological and social-historical interventions, which can reasonably aim only to reshape whiteness’ infiltrated appetites – to reduce their intensities, to redistribute their aims, and to occasionally turn those aims toward the work of reparation.”

Forget treating guns as public health model pathogens. This guy says whites are the disease, to be cured or eradicated. And the first step to destroying a virus is to remove its defenses.

Which brings us to Democratic Socialist Bernie Sanders’ “field organizer,” who actually called for the implementation of Stalinesque gulags to provide such “effective treatment.” Sanders, of course, is the subversive who “launched a political revolution” with the Democratic Socialists of America, a group that used to post its “songs of the revolution” until other people started noticing. Fortunately, the Internet Archive still allows us to see what they don’t want us to:

And that brings us back to Rep. Beyer’s tweet, or more specifically one of the many replies to it by Daily Press and Virginia Pilot reporter Marie Albiges, who posted a photo showing:

Who are those women?

“This is @Carl_Dix and the Revolution Tour,” the Revolutionary Communist Party, USA replied. “Contact us for interviews. Here’s the full statement.”

Go ahead and read it.

“The Revolution Tour &@Carl_Dix stand for the OPPOSITE of the fascist, phony “gun rights” #VirginiaRally in Richmond,” they also tweeted. “They courageously stood up to the white supremacist, gun-toting mob to represent for REAL REVOLUTION as re-envisioned by Bob Avakian.”

I leave it to you to look up Dix and Avakian on your own. By now all but the willfully blind will have gotten the picture.

It’s no “rightwing conspiracy theory” to conclude Northam, Virginia Democrats, most of the media, the gun-grabber groups, “liberal academia” and the rest of the “progressive” anti-gun establishment’s talking points are perfectly in sync with domestic enemy communists who want to destroy the system of individual rights established by the Framers of the Constitution. And no surprise, those who hate our freedom aren’t above exploiting it to help advance their totalitarian agenda.

The button to donate goes to a Paypal account. That would be the same Paypal that “targets conservatives, threatening to shut down website funding.”

“When it comes time to hang the capitalists, they will vie with each other for the rope contract.”

We’ve seen that with the way many banks and businesses have decided to let corporate social justice warriors who ascribe to the same communist-inspired gun-grab ethos stick it to gun owners and gun-related businesses. We’ve seen it in the way some anti-gun billionaires have begun proposing collectivist economic appeasement ideas as if that will ultimately keep them from being carted off in tumbrils when what they’re enabling comes to pass.

Some of us understand full well that what’s at stake is existential and that if we fall, history shows us what we can expect. We still need to do what we can to persuade our approachable countrymen to step back from the precipice, but ultimately, if it’s just us, we will not disarm. Not for the wannabe rulers, not for the useful idiots demanding to have their teeth pulled, and certainly not for genocidal communist purveyors of human misery, whose words most “commonsense gun safety law” supporters (but not all) are too damn dumb to realize they’re repeating.