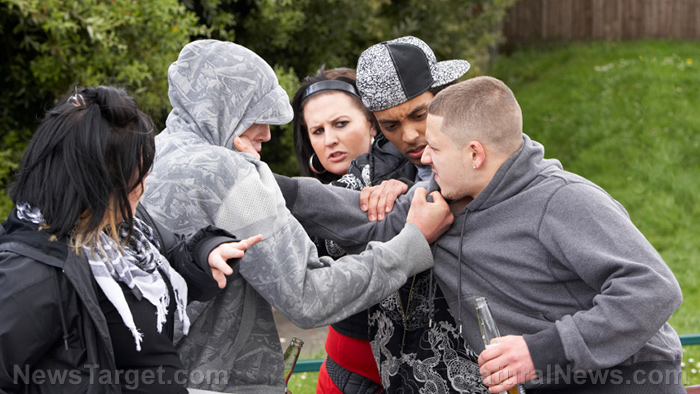 A video out of California State University shows a man being assaulted by a leftist who proceeds to have a violent hissy fit over his “All Lives Matter” sign.

The man calmly stands next to the leftist with his handwritten sign, before she almost immediately snatches it from him and goes into a meltdown, screaming, “Get the fuck out of here!”

Here is the video from the Battery today at @ChicoState. College Republicans across the nation experience treatment just like this on their campuses. It has to stop! @realDonaldTrump @californiafcr @scrowder @benshapiro @FoxNews @BrandonStraka pic.twitter.com/0Iew1sEGda

The woman then assaults the man before continuing her tirade, claiming he harassed her.

She then accuses him of ‘sacrificing’ her safety before yelling, “fuck you!”

Another clip shows a foul-mouthed student harassing activist Brandon Straka before his camerawoman is called a “dumb ass white bitch.”

Protest at @ChicoState against me speaking for the #WalkAway event here tomorrow at Chico State University, CA.
I didn’t engage w/ the students at the protest at all. Literally just came to film this promo. This is what happened…
TIX for tomorrow:https://t.co/owwJ6T9FMa pic.twitter.com/UbjqlMaPHt

Another clips shows the same young woman berating conservatives while a transgender-looking individual wearing pink with ginger hair flips off the camera.

With kids like these, America has such a bright future ahead of it.

Read more at: Summit.news or Crybullies.news.