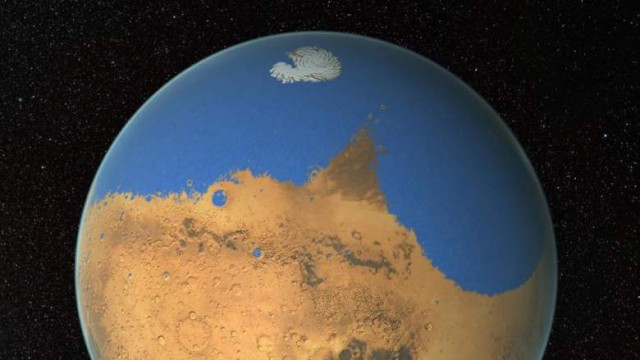 NASA has detected oxygen in the upper Martian atmosphere with the help of an instrument on board the Stratospheric Observatory for Infrared Astronomy (SOFIA). Oxygen had been discovered on the red planet before; however, this is the first time its presence has been verified in wake of the Viking and Mariner missions more than 40 years ago.

The oxygen atoms were detected in the upper atmosphere of Mars called the mesosphere. The discovery will help shed light on how gases escaped from the Martian atmosphere millions of years ago. Although oxygen has been detected on Mars in the past, the amount of oxygen detected was half of what the researchers anticipated, which may be due to differences in the atmosphere.

“Atomic oxygen in the Martian atmosphere is notoriously difficult to measure,” said Pamela Marcum, a project scientist with SOFIA, in a press statement. “To observe the far-infrared wavelengths needed to detect atomic oxygen, researchers must be above the majority of Earth’s atmosphere and use highly sensitive instruments, in this case a spectrometer. SOFIA provides both capabilities,” she added.

Because Earth’s atmosphere is dense and moist, it is difficult to get a clear image of what lies beyond it. To overcome this hurdle, the researchers utilized SOFIA, a Boeing 747SP jetliner, which has a 100-inch diameter telescope latched to it.

The project is a joint collaboration between NASA and the German Aerospace Center. ASA’s Ames Research Center in Moffett Field, California, oversees the SOFIA program. The aircraft is based at NASA’s Armstrong Flight Research Center’s hangar 703 in Palmdale, California, according to NASA’s website.

The high vantage point and the specialized instrumentation that is tuned to look past Earth’s atmosphere helped the researchers make their calculations. Although the team has yet to provide precise figures on how much atomic oxygen is in the Martian mesosphere, they did claim it is lower than expected. As a result, the researchers will keep implementing SOFIA to probe other regions of the red planet to make sure the figure wasn’t simply the result of variations in the atmosphere.

The team published their findings in the journal Astronomy and Astrophysics in 2015.